Firefighters look to weather for respite from raging US wildfires

Firefighters who had been losing ground to the huge wildfires ravaging the western US reported making headway in containing the blazes on Saturday, as cooler temperatures and a drop in wind speeds brought temporary respite amid the historic conflagration.

California’s fire agency also said that moist coastal air moving onshore early next week was likely to help in the battle against the fires, which include three of the four biggest on record in the largest US state.

However, officials also warned of a possible return to “critical fire weather” next week, at what is still typically an early stage in a normal autumn fire season. The fires have far surpassed anything on record, including devouring more than 3.2m acres in California, an area the size of Connecticut.

The weekend respite left officials in Oregon, which late last week saw the worst outbreaks in the month-long burst of wildfires, trying to assess the extent of the fatalities and damage. Although only six deaths had been confirmed by early afternoon on Saturday, an official warned the day before that the state was preparing for a “mass fatality incident” given what was already known about the extent of the destruction to buildings in the state.

Choking smoke in the region made the response harder over the weekend, with Portland reported to have the world’s worst air quality among major cities. Suburban areas of the city, in Oregon’s far North West, were directly threatened by the wildfires late last week, forcing officials to warn 500,000 people they might need to flee their homes. The evacuations so far have been fewer than a tenth of that number.

The confusion that took hold as the spread of the fires accelerated in Oregon at the end of last week was added to by what law enforcement officials dismissed as unsubstantiated claims on social media that leftwing activists were deliberately setting fires to drive people from their homes and make looting easier. The wide attention to the rumours, particularly after recent civil unrest in Portland, led the FBI to issue a statement saying they were untrue. 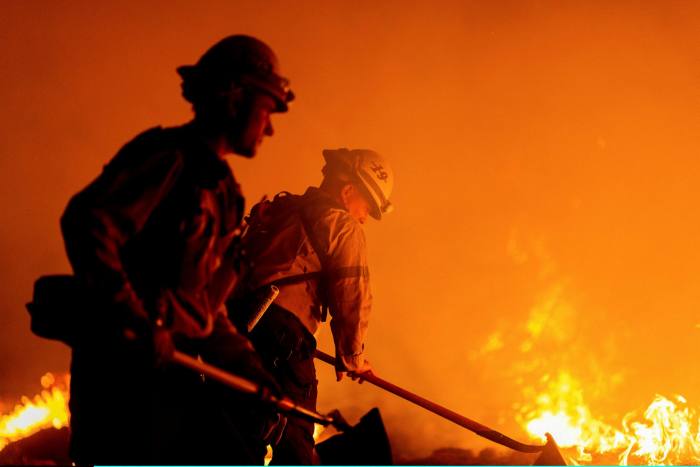 The false claims included a tweet from Paul Romero, a Republican who gained nearly a third of the vote in Oregon’s senate primary election earlier this year. Mr Romero claimed that arsonists had been caught on camera and the sheriff of Douglas County “has 6 ANTIFA under arrest”.

The sheriff’s office later put out a statement saying that its dispatchers had been “overrun” with calls from people worried about the claims, and that the report was not true. The false tweet was still online on Saturday, and had been retweeted more than 10,000 times.

In California, the state fire agency reported on Saturday that the 16,000 firefighters battling the flames had made headway in containing all 28 of the major wildfires burning in the state. However, the largest fire — a series of separate outbreaks known as the August complex that had burnt together to form one huge conflagration in Mendocino county, in the north of the state — had been only 25 per cent contained by Saturday afternoon. This image obtained from the National Oceanic and Atmospheric Administration shows smoke from Oregon and California wildfires moving west, south and east on Saturday © NOAA/GOES/AFP via Getty Images

By contrasts, two of the largest fires, closer to San Francisco, were reported to be more than 90 per cent contained, after burning for almost four weeks.

Even if the spread of the fire is halted, fire officials have said that its effects could be felt for much longer. The August complex could burn for weeks, sending a blanket of smoke over the densely populated San Francisco bay area, some 100 miles to the south, before the beginning of the rain season, which normally starts in November.