Terence Conran was the great panjandrum of British design. His influence was immense and enduring, spanning seven decades.

Conran, who has died aged 88, exuded a kind of plutocratic success — always pictured in a suit, “Conran blue” shirt and self-consciously colourful socks, puffing on a fat Cuban cigar and reclining slightly in some modernist chair. In fact, he saw his mission as democratising design and his politics were always to the left. Though he billed himself as a designer, his real talent lay in what today might be called “curating” — picking the best products, foods and trends, magpie-like, and re-presenting them to a British audience via his home store, Habitat. Conran became the nation’s middle-class tastemaker.

Born in suburban Surrey in 1931, he seems to have been disappointed by his father, whose business went bust, but inspired by a creative mother who encouraged him in the arts. As a child, he lost the sight in one eye making furniture in a garden shed, briefly attended London’s Central School for Arts and Crafts and established an east London studio with his friend the artist Eduardo Paolozzi. He designed fashionable, but rather derivative, textiles and furniture and opened his first restaurant, the Soup Kitchen in Charing Cross in 1953, after having worked as a plongeur in Paris.

Conran was always trying to address the lack of taste in British culture, from the palate to the patio. He introduced French country-bistro style cooking and Scandinavian chairs, Italian lamps, flat-pack furniture and brasserie dining. He even claimed credit for boosting British sex lives by introducing the duvet. In 1964 he opened Habitat on London’s Fulham Road, a brilliantly conceived and timed department store promoting contemporary lifestyles for a newly minted, post-austerity generation who had travelled to the Continent, enjoyed French films, eaten Italian food and wanted something more stylish than a three-piece suite and a television disguised in a faux Victorian cabinet. Habitat was a hang out, an interiors equivalent of the fashion-store Biba, the beginnings of an aspirational lifestyle culture. Its aesthetic influenced everything from film sets to the architectural language for Milton Keynes (on which Conran was an adviser).

Conran’s base was Chelsea, the centre of Swinging London, a place caught between old-world gentility, bohemianism and gentrification. His 1987 revivification of the old Michelin building, a proto-Art Deco former tyre depot from 1910, became his global headquarters. It housed a fine-dining French restaurant, Bibendum with a top-end interiors and design department store as well as accommodation for his design and architecture offices. By then Habitat had faded, becoming part of an unwieldy retail empire, including the dowdy Mothercare and British Home Stores, which collapsed taking much of Conran’s money and reputation with it.

Always resilient, he bounced back with new ventures. But his expanding restaurant empire also fell victim to imperial over-reach, becoming bland, corporate and, ironically, very British institutions. His claim, however, to have revolutionised British dining was not without foundation: some of his later projects showed a shrewd eye for trends and locations. 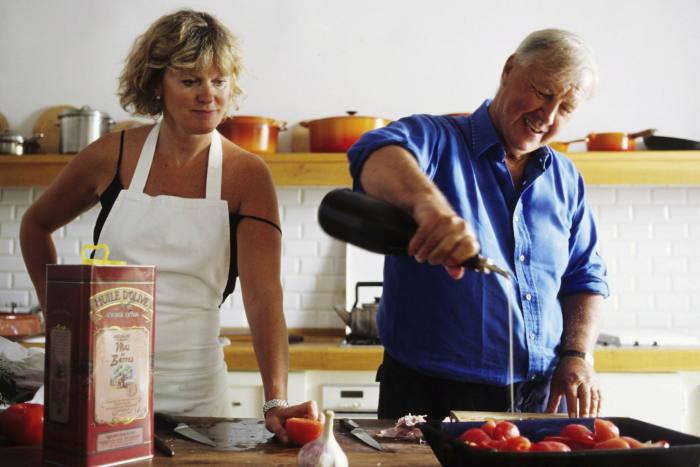 He was married four times and had five children, including Sebastian and Jasper, both of whom became names in design in their own right.

Conran was not particularly original. His designs for textiles, chairs and furniture often looked remarkably familiar (occasionally ending up in legal tangles) but his influence as an advocate for design as a public good is undoubted. In 1982 he funded the opening of a gallery in the Victoria and Albert Museum dedicated to contemporary design. It grew into the Design Museum and, in 1989, moved into a former banana warehouse dressed up as a modernist villa in Shad Thames. He perfectly captured the wave of Yuppie design, the chrome, black leather and bare brick of the gentrified loft.

In 2016 the Design Museum reopened in an expensive new home in Kensington’s former Commonwealth Institute. Conran sank huge sums into the museum, which still runs without government funding. If there is a criticism to be made of the space it is that it is mostly elegant but a little vacuous. Perhaps what Conran leaves us is a more civilised culture, in which design is admired at a distance but still not properly metabolised by British culture in the way he would have wanted.

Perhaps Conran, who could be by turns charming and irascible, is better represented by his country estate, the beautiful Georgian Barton Court in Berkshire. There he established a furniture maker and a farm and contemplated the last years of his life from a comfortable Scandinavian recliner. If he had his time again, Conran said, he would have been a gardener.