Worst US wildfires on record ravage the west coast

Firefighters in Oregon were battling 16 separate large fires that have forced authorities to evacuate 40,000 people and alert another 500,000 to prepare to flee, including residents in towns close to the city of Portland.

Doug Grafe, the fire chief in the northwestern US state, said on Friday that the three largest fires were in counties near Portland and had engulfed a combined 440,000 acres, stretching 56 miles across the northern part of the state.

“We have not seen the like of this fire in the state, integrated with our communities, ever before,” Mr Grafe said.

The 2020 wildfire season on America’s west coast is yet to reach its peak burning period but has already shattered records. Of the 20 largest wildfires in California’s history, six are currently active. The largest, the August Complex Fire, which started as dozens of smaller blazes, is the biggest on record — burning almost 500,000 acres as of Thursday.

Many of the initial blazes last month were set off by lightning storms. Now seasonal high winds have helped them spread. By Friday, firefighters were tackling 100 major blazes spread across three states — Washington, as well as California and Oregon.

At least 16 people are known to have died, but Andrew Phelps, Oregon’s director of emergency management, said the state was anticipating the death toll would go much higher based on the “thousands of structures” that have already been destroyed.

“We’re preparing for a mass fatality incident based on what we know about the number of structures that have been lost,” Mr Phelps said.

More than 3.1m acres have burnt so far in California, 60 per cent more than the previous fire season record of 1.9m acres in 2018 © David McNew/Getty

Kate Brown, the Oregon governor, said that despite the growing conflagration, which had produced “dozens of missing persons”, weather was beginning to shift, giving authorities hope at least half of the fires could be brought under control in the coming days.

Hot winds from the east that were whipping up the largest fires with unprecedented speed had shifted to bring cooler, wetter air from the Pacific Ocean, giving firefighters hope they could slow or extinguish eight of the 16 fires. 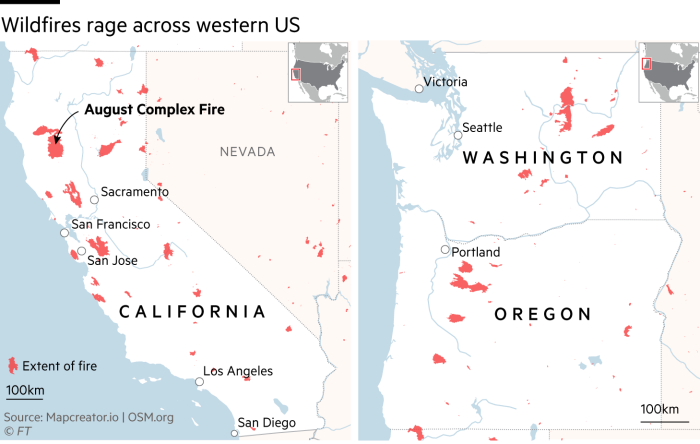 The fires ravaging the US west have surprised authorities with their size and speed, particularly in California, which has found itself scrambling to fight blazes in the northern part of the state despite years of experience with similar, smaller wildfires.

In that state, more than 3.1m acres have burnt so far — 60 per cent more than the previous fire season record of 1.9m acres in 2018 — according to the state department of forestry and fire protection.

In the San Francisco area, the orange sky over the city and most of Silicon Valley this week was the result of wildfire smoke blowing in from Mendocino County, 100 miles to the north. As it neared the city, it met cold air from the Pacific Ocean, which kept the smoke higher in the atmosphere, leaving the air at street level relatively clean. Slightly brighter skies later in the week came with poorer, choking air quality.

I certainly looked at the forecast . . . [and] they didn’t say: ‘Oh, and there’s a high likelihood that it will look like Mordor tomorrow.

When Bernie Melvin, a life-long San Franciscan, awoke on Wednesday the city was cast in an apocalyptic orange glow.

Smoke and ash had mixed with cooler air from the Pacific Ocean, blocking out the sun, and the morning felt like midnight. At the coffee shop she owns in the city’s affluent Noe Valley neighbourhood, one of the regulars quoted a line to her from the bible about the end of the world. “I was like . . . he’s not kidding,” she said.

“It was like an unexpected solar eclipse,” said Alex Trope, resident psychiatrist at the University of California in San Francisco where he specialises in the effects of climate-related events on mental health. “I certainly looked at the forecast the day before [and] they didn’t say: ‘Oh, and there’s a high likelihood that it will look like Mordor tomorrow.’”

The dark humour is a thin veil for growing fear in a region often celebrated for the unbridled optimism seen as a driving force behind its tech-driven prosperity. Patrick Collison, chief executive of payments company Stripe, wrote on Twitter that the sky should act as a reminder humans must “coexist with our forests” and reassess how technology and science can help prevent fires.

Dr Trope put it another way: “It’s almost like God’s Instagram filter came down to show something visually evocative to us.” 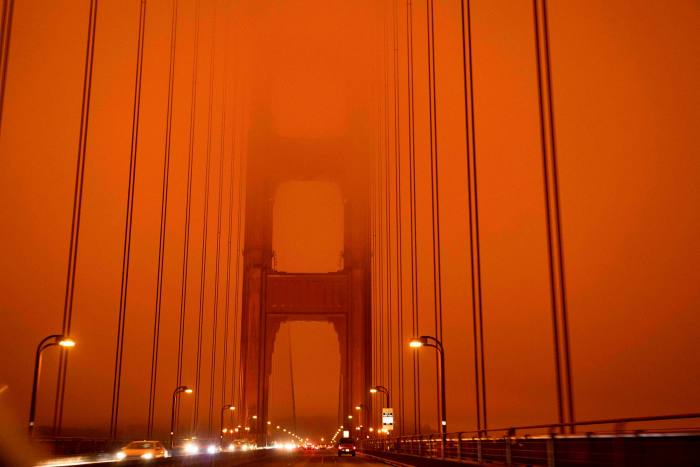 The sheer scale of the fires has meant that in California, unlike in previous years, fire crews have been unable to depend on help from neighbouring states who are fighting their own blazes. Outnumbered and overwhelmed, many are focusing on evacuating residents before attempting to control the fires, a task complicated by Covid-19.

“Covid has made it tougher this year,” said Bruce Riordan, programme director at UC Berkeley’s Climate Readiness Institute. “In terms of evacuation centres, they have to be run differently because they can’t have 1,000 people in the same place.”

Climate experts hope the immense geographical footprint of the 2020 fires will provoke the type of urgent action from policymakers that has previously been lacking. 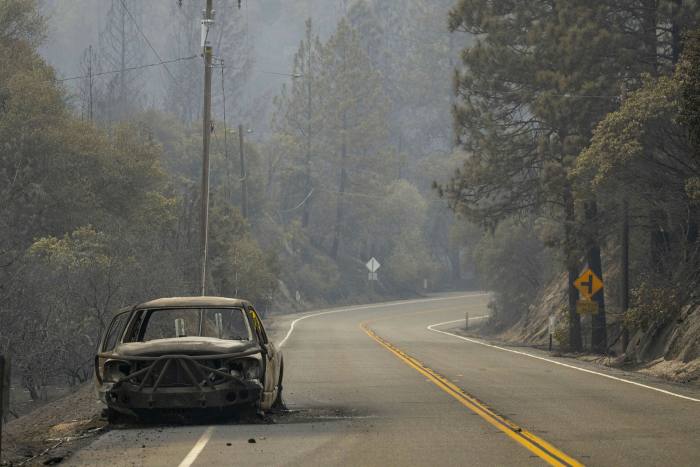 Residents have been evacuated across many parts of California, Oregon and Washington © Peter Dasilva/EPA-EFE/Shutterstock

Western Washington state, an area that has historically been too cold and damp for significant fires, has become a tinderbox due to progressively hotter summers, explained Susan Prichard, a fire ecologist from the University of Washington’s School of Environmental and Forest Sciences.

“I’m afraid that we’re in a new reality,” she said. “There has to be much more talk about proactive management to make our lands much less susceptible to catastrophic fire. It can’t come soon enough. We really need it.”

Ms Prichard, like many of her peers, said forest management needed to include more prescribed burning — where controlled fires are used to remove “fuel” from dry areas — as well as steps to “harden” homes and buildings, removing highly flammable materials such as roofs made from wood shingles. 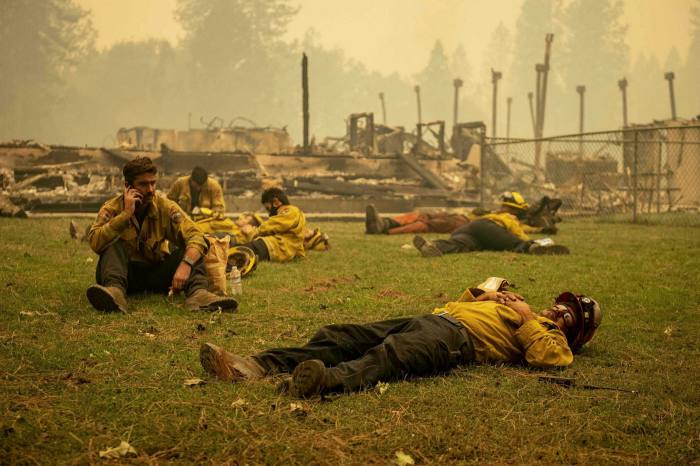 Fire crews like this one in Berry Creek, California, are battling to evacuate communities © Jason Pierce/Sacramento Bee/ZUMA/dpa

Earlier this year a number of climate initiatives in California were put on hold by Governor Gavin Newsom due to budget shortfalls blamed on the economic impact of coronavirus.

More than $5bn earmarked to retrofit key infrastructure and manage forests has been postponed.

Meanwhile, coronavirus is expected to push more city dwellers, unshackled from the demands of the office by more homeworking, to migrate to rural communities putting more pressure on forested areas.

“People say they want a little cabin in the woods,” said Ms Prichard. “That idea is wonderful until you come up with the reality that those woods are often fire prone. And at this point it’s not a matter of if, it’s matter of when they will burn.” 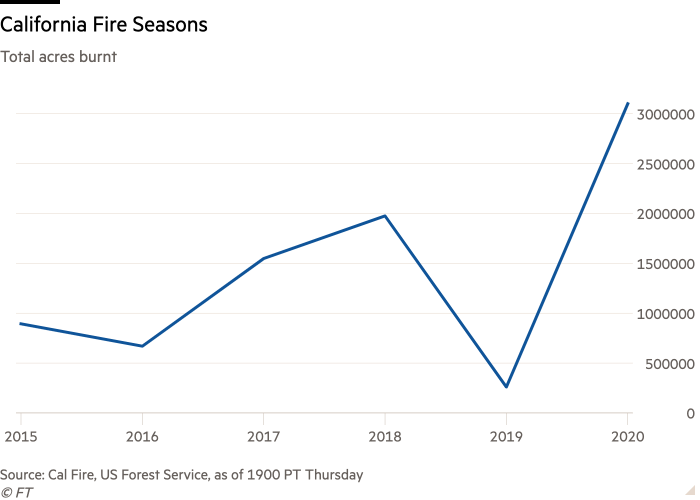 *An earlier version of this article mischaracterised the Oregon evacuation orders

Covid surge hangs over US election in closing days